DOT # Changes:
Some mothers and fathers may be looking forward to summer ending, however I am sure a lot of small business owners operating pick up trucks and trailers in Massachusetts are wishing they had a few more weeks. There are big changes to who needs a DOT # coming September 1st.
Have faith – there is still time!! 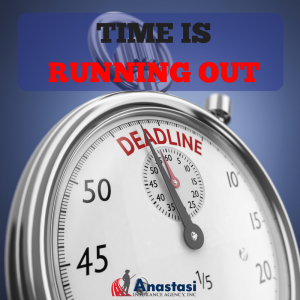 September 1 is the deadline to obtain a DOT # and properly display the name of your company, address Phone # and DOT number on all commercial motor vehicles that weigh 10,001 lbs or more or in combination with a trailer weigh even if you do not travel out of state.

Click here and scroll to section 2.22 for specifics on what vehicles are to be marked and how

Important distinction: You do not need a DOT# if you operate a motor truck or in combination with a trailer that has a maximum load capacity of 2,000 lbs -10,000lbs BUT you do need to have your vehicles MARKED according to the 540 CMR2.22
So lets recap – You need a DOT# and proper marking if:

If you have any questions, or need to obtain your DOT # by the deadline, please contact our office and speak to our highly trained Commercial Lines Representative that can walk you through the process and answer any questions you may have. Your Business First…

According to a 2016 poll by the Insurance Information Institute, only 40% of tenants carry renter’s insurance.

Renter’s insurance is usually thought of as “optional” coverage – it just makes sense to add an insurance policy that covers that loss of your possessions. Just because you rent doesn’t mean your possessions are any less valuable!

Everybody who rents! In the result of a fire, flood or other disaster, your landlord’s insurance does not cover your possessions. The only things that their insurance covers is the building and grounds – not the contents of each unit.

Renter’s insurance covers your belongings,  in the event of :

When was the last time you looked around at your possessions and took inventory? You might be surprised at how valuable your possessions really are and what it would cost to replace them. Keeping an updated inventory records will be extremely valuable if you ever have to file a claim. There are many resources you can use that can help create a home inventory (check this one out).

What else does renters insurance cover?

Renter’s insurance also offers an add-on liability protections which protects you from lawsuits should someone be injured on your property.

Another big bonus to renter’s insurance is that some policies offer what is called “off-premise coverage”. This means that your belongings are covered outside of your home. For example, if you are staying in a hotel or your car is broken into – they are protected.

How much does renters insurance cost?

The short answer is: not much, compared to the cost of replacing all your stuff. Some insurance policies offer a discount to your auto or business insurance if you add on renter’s insurance – making the cost even more affordable. Working with your agent is the best way to find which coverage and policy is for you. Your agent will help go through your list and determine if you need “actual cash value” or “replacement cost” coverage. Determining this will determine the cost of your premium.

Hazards for Women on Construction Sites

There are common hazards for women that work on construction sites. Know how to identify these risks to keep your employees safe:

Workplace culture: The construction industry has been overwhelmingly male-dominated for years, and on many job sites, female construction workers are not welcome. Isolation—working as the only female on a job site or being ostracized by co-workers—evokes both stress and fear of assault. Many female construction workers say they are reluctant to report workplace safety and health problems for fear of being tagged as complainers or whiners, which would further strain their workplace relationships and jeopardize their employment.

The National Institute for Occupational Safety and Health (NIOSH) found that in a one-year period, 41 percent of female construction workers suffered from gender harassment.

Hazard reporting: The work culture described above—combined with female construction workers’ more tenuous hold on their jobs than that of the more senior workers or male workers—often deters women from reporting unsafe or unhealthy working conditions. Women in a NIOSH study reported that they could not bring up the issue of proper restrooms or worksite safety, because doing so might threaten their employment.

Access to sanitary facilities: Access to sanitary facilities is frequently a problem on new construction sites. Temporary facilities are usually unisex, often without privacy and generally not maintained well. The availability and cleanliness of restroom facilities are major concerns for women. According to a survey report by Chicago Women in Trades (CWIT), 80 percent of female construction workers have encountered worksites with either dirty toilets or no toilets whatsoever. Respondents to the CWIT survey said that facilities, when available, were filthy or were some distance from the site. Unclean facilities and the avoidance of using them can result in disease, including urinary tract infections (which can happen when a person delays urinating). Because of this, women report that they avoid drinking water on the job, risking heat stress and other health problems. Courts have found that the lack of appropriate sanitary facilities is discriminatory and violates OSHA standards.

Personal protective equipment (PPE) and clothing (PPC) fitment: Many women in nontraditional jobs, such as the construction trades, complain of ill-fitting PPC and PPE. Clothing or equipment that is not sized properly or does not fit can compromise personal safety and the protection offered. It also may not function effectively in the manner for which it was designed. This can cause serious health and safety risks for women.

Ergonomics: Studies have shown that to reduce work-related musculoskeletal disorders, tools, materials and equipment should be designed based in part on ergonomic considerations. Tools and equipment, like clothing, are often designed to be used by average-sized men.

Take steps to promote the safety of female employees:

Include sexual harassment prevention training in safety and health programs.

To address the problem of workplace isolation, employers, apprenticeship programs and unions (where responsible) should assign female workers to work in groups of two or more when possible, especially those who are relatively new to the construction trade.

Make sure supervisors are trained in ensuring the safety of female workers and can answer any questions workers may have.

Gender-separate sanitary facilities should be provided on worksites.

Where changing rooms are provided on construction sites, they should also be gender-separated and provided with inside and outside locking mechanisms.

Employees should be allowed to use sanitary or hand-washing facilities as needed.

Toilet facilities should be kept clean and in good repair with clean toilet paper within reach.

Hand-washing facilities should exist within close proximity to toilet facilities.

Employers and unions should make skills training courses available and encourage all workers to take advantage of them.

Supervisors need to emphasize safety as well as productivity on the job site.

Employers should emphasize that safety training is as important as skills training.

The design of PPE and PPC for women should be based on female measurements.

Union apprenticeship programs should provide female construction workers with resources on where to find equipment and clothing that fits.

Employers should make sure that all workers of all sizes have well-fitting PPE and PPC for safe and efficient performance.

It should be accepted that some workers need to use different lifting and material handling techniques.

Employers, unions, apprenticeship programs and other training entities should review skills training programs to see whether alternative methods are included for getting work accomplished by workers of different sizes or strengths. All programs should emphasize the importance of safe lifting.

Workers need to hear from employers and unions that it’s acceptable to ask for help and to explore alternative ways to lift and carry.

All workers should be trained in the proper ways to lift and bend.

Employers should post Safety Data Sheets (SDS) for each chemical present on the worksite.

Workers should read all SDSs and share the information with their physicians if they are pregnant or planning to start a family.

All workers should educate themselves about the potential reproductive risks from exposure to certain chemicals.

Employers should make reasonable accommodations for workers in later stages of pregnancy, rather than forcing them out of the workplace.

During the later stages of pregnancy, women should consult with their physicians about strenuous physical activities on the job.

Heat danger comes in many forms and ranges across a whole spectrum from inconvenient and itchy to downright deadly. When a heatwave is approaching, thinking ahead and being properly prepared and equipped will help you maximize your fun in the sun.

Heat exhaustion: this can look like heat stroke, but is not as serious. Heat exhaustion can be addressed with hydration and moving to a cooler area.

Heat Stroke: is a serious and possibly deadly condition.

Check out the below graphic from the CDC website to recognize the symptoms of both. This graphic is important to keep handy during a heatwave. 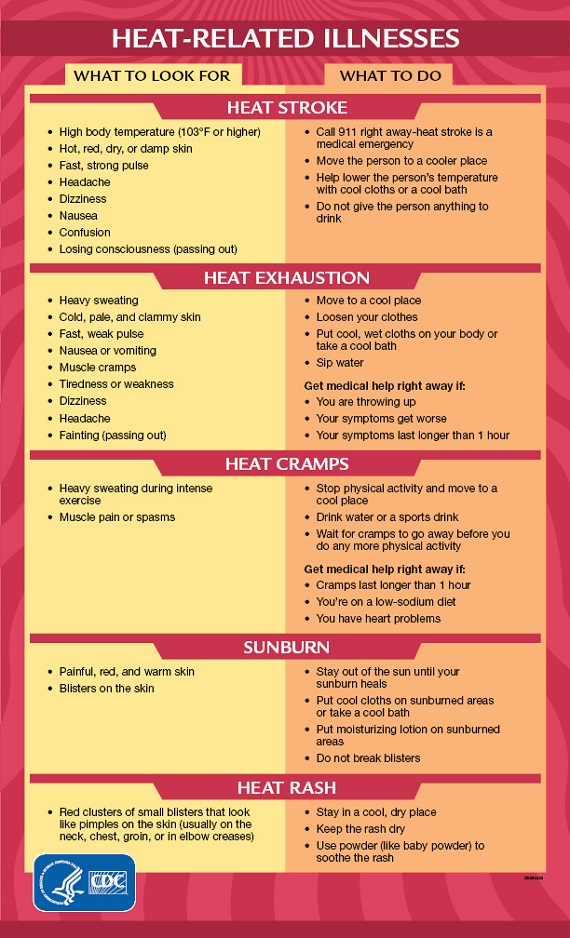 The staff at Anastasi Insurance understands the many pressures facing a small business owner today and your need for fast accurate results. From juggling the needs of employees and customers to managing cash flow and staying ahead of intense competition, we are in a unique position to help you evaluate the cost of assuming risk or transferring that risk to an insurance company or surety.

Whether you need to protect your car and home, want insurance for the possessions in your apartment, or need a general umbrella policy for peace of mind, our agents will provide you with outstanding service and the policies you need.

Exceptional customer service is our core value. We’re here to answer questions, provide quotes, and get you on track after a setback. As a member of Renaissance Alliance, we represent over 40 top insurance companies, allowing us to aggressively negotiate terms and conditions on your behalf.